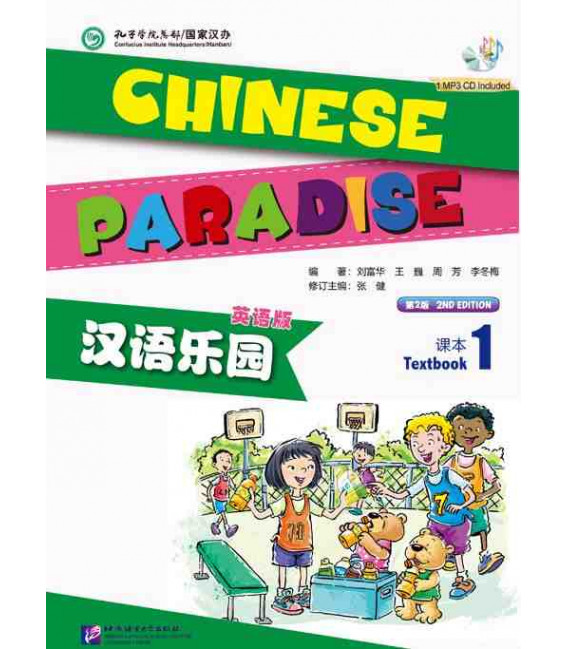 First volume of the textbook of the popular serie Chinese Paradise targeted to children who start learning Chinese at the age of 5 or 6 years old. This is the second edition of the series. This volume includes 6 lessons in which students will learn new vocabulary through pictures, following a didactic method. All words are written with pinyin and they are also translated into English.

Lessons also contain a great number of pictures in full color and each of them is focused in one area: numbers, days of the week, food or parts of the body among many others.

This serie also has a Workbook.

The book includes a CD

Chinese Paradise is a series of children’s elementary Chinese textbooks targeted at primary school students in other countries; it is a key textbook project of Hanban. Its first English edition was published in 2005, followed by a succession of 45 language editions of the Level 1 books. At present, the series has been sold to more than 50 countries and areas in the world, been widely used in primary and middle schools overseas and become the most popular overseas children’s Chinese textbooks.

Since 2013 Beijing Language and Culture University Press has begun to revise the published books and compile the follow-ups. The second edition of the whole series has altogether six levels, suitable for students of Grades 1-6 in primary schools outside of China and in international schools in China. Each level comprises one textbook (with a CD), one workbook (with a CD), one set of word cards (for all language editions), one teacher’s book (for all language editions), one corresponding reader, one set of tests, and four multimedia CD-ROMs.

This is Textbook 1 of the second English edition, including six units, 12 lessons. Each lesson teaches 1-2 Chinese characters, about 10 new words and one basic sentence pattern. To be specific, the contents involve interactive sentence patterns, new words, learning of Chinese characters, explanations of Chinese culture in the learner’s native language with illustrations, handicrafts, songs, stories and other games and activities. After finishing this book, students will be able to say a few simple sentences, sing some Chinese children’s songs and get some knowledge about Chinese culture.