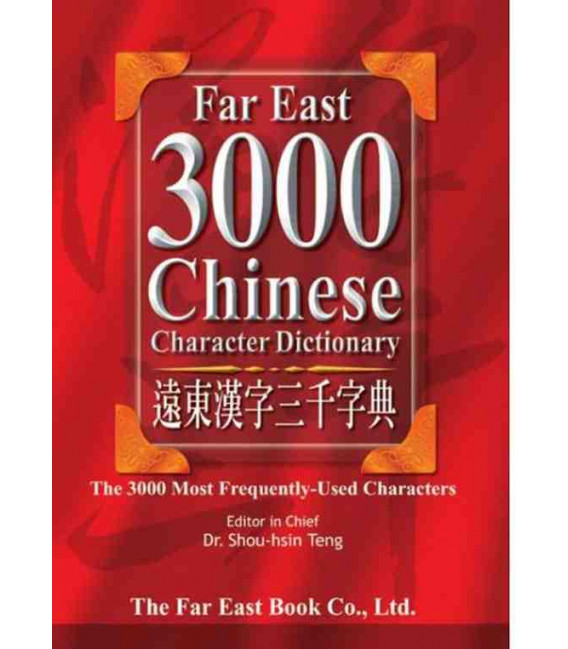 Dictionary written in English of the most common 3000 Chinese characters. These characters appear in 99% of Chinese media.

Vocabulary
This dictionary is adapted to the list of 3000 essential characters published in 1997 by the Ministry of Education. Based in this list, they have included more than 14.000 sentences and expressions from different sources. As a matter of fact, when they had to select each expression, they tried to pick modern and useful ones.

Characters's shape
This dictionary includes the traditional shape of the characters.

Word ordering.
All 3000 characters in this dictionary have been classified by its spelling in the phonetic system Hanyu Pinyin. Those characters with the same pronunciation can be ordered by the number of strokes .

Definition in English
This dictionary shows all posible meanings in English in characters and words. These definitions seek to be clear and short. For the expressions, instead of the literal translation, a implicit meaning in English is given.

This Dictionary refers to the Ministry of Education’s list of 3,000 essential Chinese characters. We have arranged these characters to maximize ease of use for students approaching Mandarin as a foreign language: characters are first arranged according to their spelling in the Hanyu Pinyin phonetic system. Characters that have the same pronunciation are arranged, in ascending order, according to the number of strokes used to write them. When the stroke number is also the same, characters are listed according to frequency, with more frequent characters coming first. To help students learn and practice characters, a stroke-by-stroke diagram accompanies each one. Also contained in each entry are the traditional and simplified forms of each character, Hanyu Pinyin and Zhuyin Fuhao (Mandarin Phonetic Symbols) phonetic systems, radicals, stroke numbers, phrases, idioms, and English definitions. For greater ease of use and flexibility, we have provided five indices to the dictionary: Pinyin, Zhuyin, radical, stroke number, and frequency. If one learns the 3,000 characters in this dictionary, one will be able to recognize 99 percent of the characters published in various Chinese media.